The ice maker, which is included in the design of LG brand refrigerators, is a technologically complex device that should not be repaired on its own in case of serious malfunctions. This is justified by the presence of many high-tech components in the device, such as: an electronic board, a capacitor, a fan, a compressor, and other components that are difficult to repair. Due to the complex design, the ice maker does not tolerate artisanal repair activities and rough, unskilled handling.

Whatever causes the failure of the ice maker, it is strongly recommended that you seek the professional services of a qualified technician. Contacting the master will allow you to quickly, efficiently and inexpensively eliminate the breakdown and perform maintenance of refrigeration equipment. Independent intervention can lead to more significant malfunctions of all equipment. 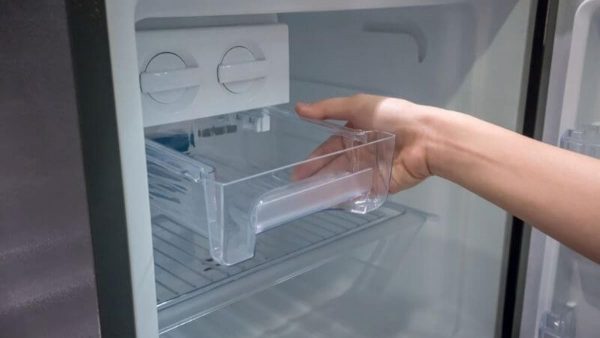 The most common malfunctions of LG ice makers

In LG domestic refrigeration units, ice makers are used to create ice cubes for cooling various drinks. The principle of operation of the device is quite simple – water is poured into it, the freezing mode is set and the output is a large mass of ice cubes. The device may suddenly stop freezing ice for the following reasons:

On some models of LG refrigeration equipment, the ice maker failure error does not appear on the display on its own. To find out about a breakdown, you must press and hold for 3 seconds two buttons – temperature adjustment and instant freezing in the freezer compartment. If everything is fine, then several sensors will light up – the ice maker, the dispenser icon, the cool zone and other working units that are built into the equipment. If the ice maker icon does not light up, it means that a breakdown has occurred with it, and it is advisable to invite a specialist to eliminate it. 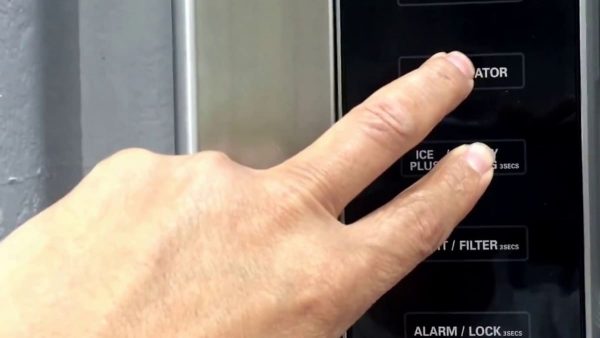 In some models of LG brand refrigeration equipment, instead of an LCD error monitor, an indicator board is used to display equipment error codes. If one of the options does not work, the programmed combination of LEDs lights up in sequence. At the same time, the function itself cannot be configured on the control panel using the buttons. As in the first case, the ice maker error is not displayed on the scoreboard either. To find out about the error, you need to simultaneously hold down the temperature adjustment keys in the freezer and refrigerator compartment. The most common mistakes include:

It is worth paying attention to the fact that a clogged water filter can reduce the flow of water going to the dispenser and significantly limit the normal functioning of the icemaker. The filter element must be replaced every six months, this will control the flow of water and improve its quality, which will positively affect the ice cubes produced by the icemaker.

Other failures of the device that generates ice in the refrigerator

The door switch turns off the ice and water dispenser when the refrigeration door is open. In cases where the transmitter located on the door is broken, the dispenser cannot be activated. To determine if the door switch is operational or not, it is recommended to use a multimeter to test the switch for continuity. If there is no continuity when the switch is turned on, the device needs to be replaced. 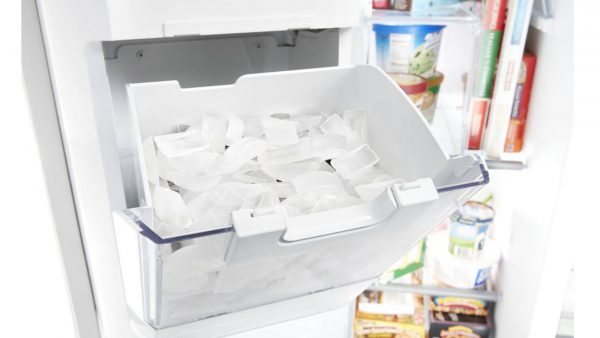 The ice making unit module is equipped with a motor that rotates the ice pusher cutting element and rotates the inner tray designed to extract the ice cubes into a special bucket. If the thermostat or sensor located on the tray reaches approximately minus 10 degrees, the motor starts the ice discharge cycle. At the end of the dump, the ice module energizes the water valve to fill the tray with new liquid. If the module is broken, then the icemaker will not freeze ice or unload it.

How to fix it yourself. The first step is to make sure the switch is off. If the ice module is equipped with ejector blades, you need to make sure that ice cubes do not get stuck in its blades. There are usually checkpoints in the module design that can be checked to further diagnose problems with the module. 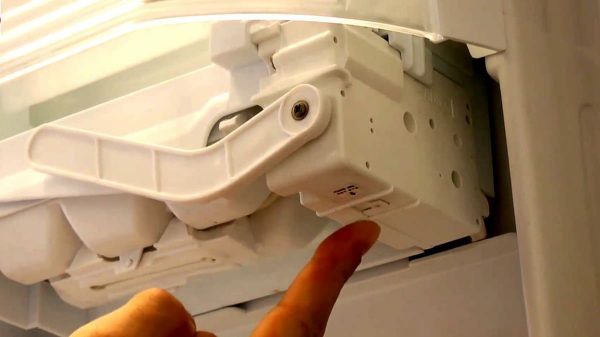 Breakdown in the block of the icemaker

One of the components of the block of the ice-regenerating device could fail. In this case, repair will not help, since most of the parts of the unit are not sold separately, and the entire device will have to be replaced. Before replacing it, inspect the water inlet valve, fan and water conveying line. If these systems are not broken and function perfectly, and the temperature of the freezer compartment exceeds minus 10 degrees, then it is necessary to change the icemaker assembly.

Before proceeding with troubleshooting and self-repair, experts recommend checking the water pressure in the apartment, it may be insufficient. The water valve supplies liquid to a dispenser designed for water and ice cubes. The inlet water valve requires a pressure that will not be lower than 1.4 bar for stable operation. Check water flow and pressure.

Typical signs of a malfunctioning icemaker are partial filling of molds or irregularly shaped ice cubes. The pump is designed to pump water flows into the compartment of the ice-generating device. The liquid enters there through the nozzles. If water does not flow to the place, therefore, a blockage has formed that must be removed. Self-cleaning of blockage requires the following actions:

The clumsy shape of ice cubes and their cloudy color most often appear due to the use of hard water, which contains a large amount of calcium and limestone. If the water in your region of residence has many different impurities, it is necessary to install a cleaning filter in the house, then the ice will be of the appropriate shape and the required transparency.