If snow or ice forms in the freezer, it’s impossible not to notice and to ignore it, es-pecially is the freezer of your device is not big enough and every cm of space matters. But it is not only about the discomfort, but the ice or frost cover inside your fridge can also be a signal of a serious breakage or failure of the unit.

What can cause the ice build-up?

If you noticed that the ice or snow layer gradually begins to intend on the walls of the camera, it is better not to let the case on its own, and try on their own or with the help of a wizard to solve this issue.

Reasons for frost in the freezer

If you notice an ice formation in a low-temperature freezer, first check how tight the freezer door closes. If everything is okay, you should start checking the settings of your fridge as soon as possible.

Thus, ice can appear in the freezer compartment in such cases:

If the modes and temperature are all right, your fridge is likely to be freezing ice/frost due to breakage.

The most frequent breakdowns that provoke frost building on the freezer walls – what are they, how to determine and eliminate?

Usually, the first thing you do when see large amounts of ice in your freezer — is defrosting the fridge. But it doesn’t always help. Frost formation and ice growth can often occur for these reasons:

Breakage. The drain hole of the freezer is clogged. The point is that the ice melts daily under the influence of TEN and meltwater flows through the drain hole from the freezer. If the water outlet is clogged, the water accumulates at the bottom of the chamber and freezes over time. 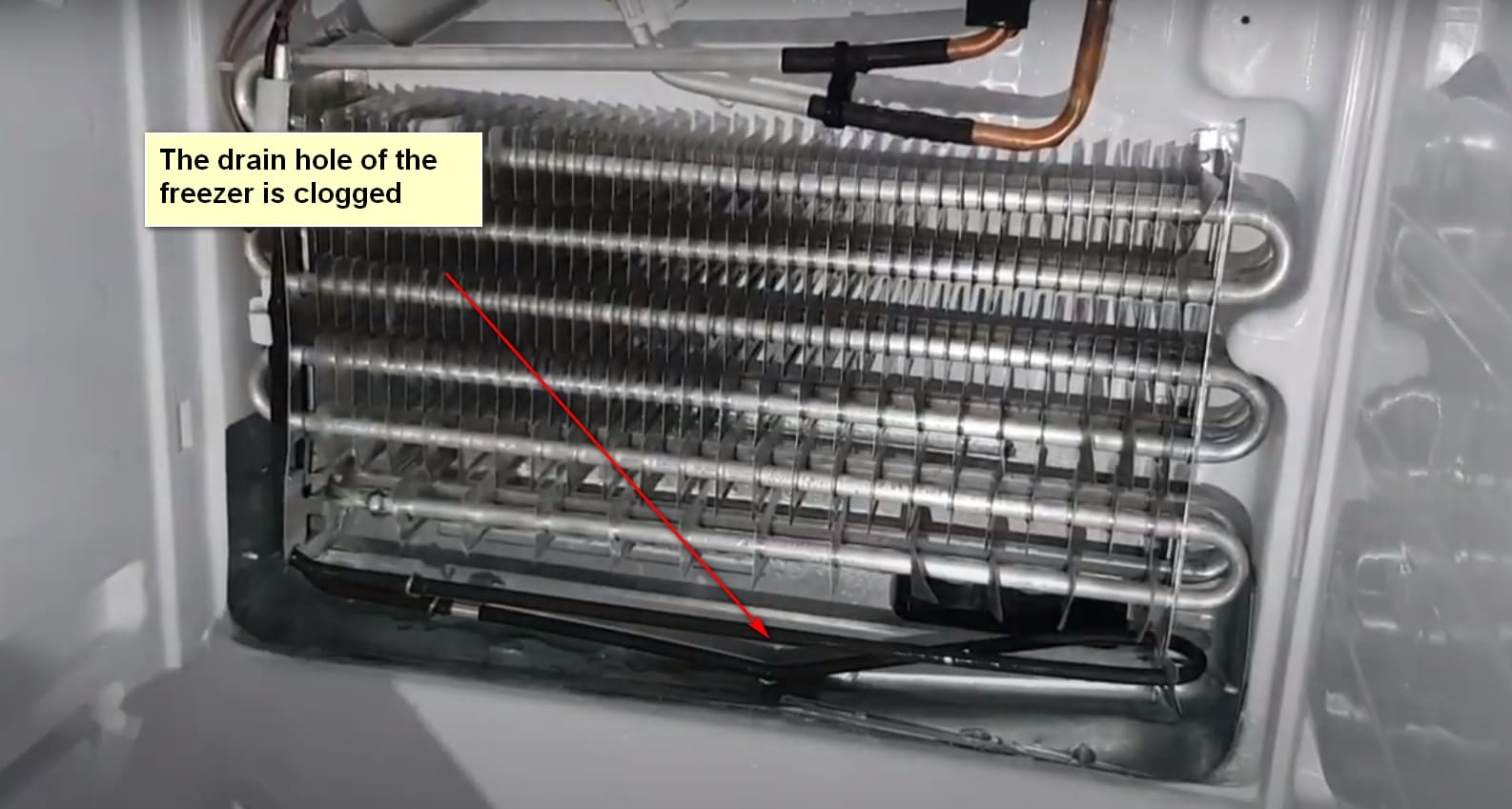 Signs.  It is easy to determine this breakage – ice is only formed at the bottom of the freezer, and you can also find their water that simply did not have time to freeze.

How do you fix it?  Clean the drain with warm water, which should be fed into the hole from the syringe or syringe. Not all models have a drain available, sometimes you need to remove the panel, so you can entrust this to a craftsman. Such malfunction is typical for refrigerators with No Frost.

Failure.  The defrost system is out of order. This system has the most important function – cleaning the freezer compartment from ice. As it is a whole system, any of its elements – defrost timer, TAN, evaporator, defroster, fuse, or another unit – can fail. This slows down the start of the system, so the evaporator becomes a snow layer. This causes the cooling capacity of the unit to drop and the chamber temperature to rise all the time. The compressor tries to actively freeze to compensate for the increase in temperature, so it switches off very rarely. In devices with NoFrost, the channel through which the cold air is sent to the main chamber is also frozen, which is why it becomes warm.

Signs.  A thick layer of snow on the back wall of the freezer.  The compressor works almost all the time and the temperature in the chamber is high.  The thicker the snow layer, the seldom the engine is switched off, and the warmer the low-temperature chamber is.

How do you fix it?  We need to diagnose the system and find out which one of the components has failed.  Not for self-repair.

Breakage. The temperature sensor broke. If the control board gets the wrong in-formation about what temperature is in the freezer, it sends a command to the motor to freeze harder than usual. 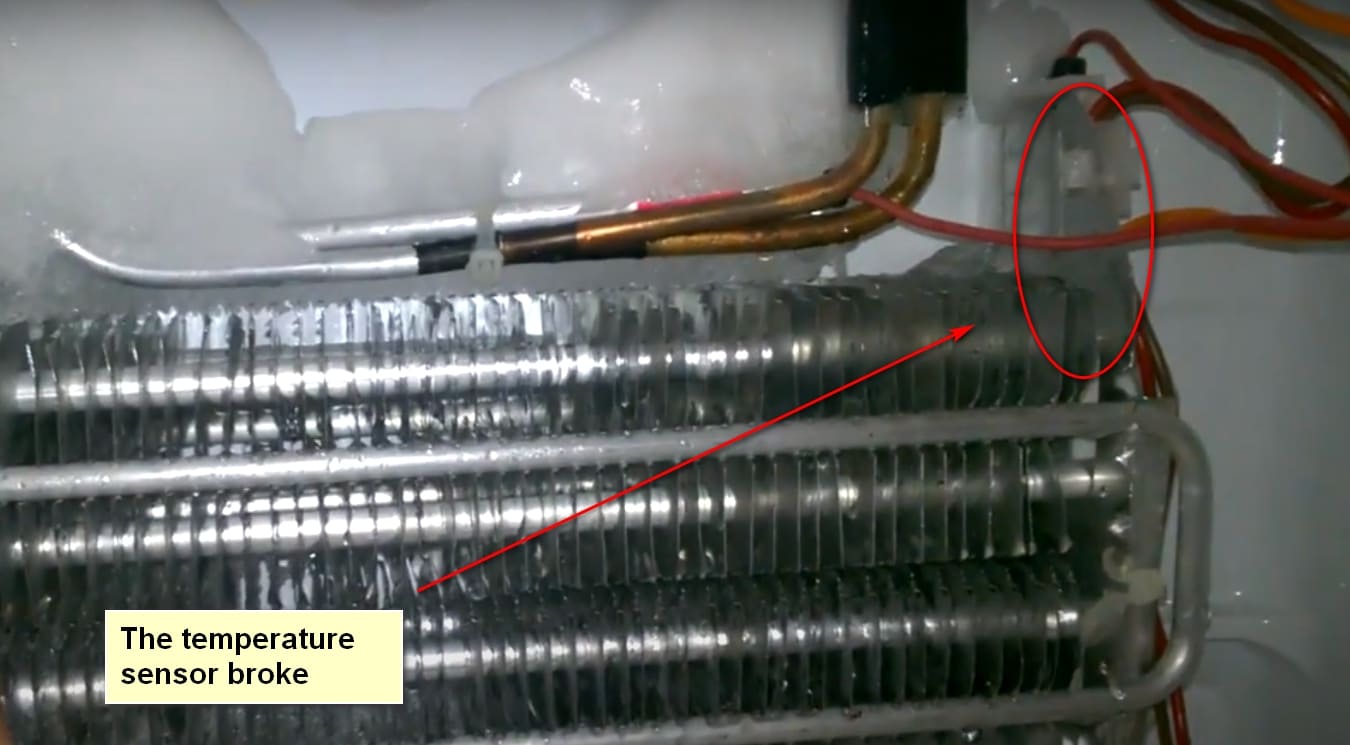 Signs.  If you have noticed that the device switches off too seldom, and the walls of the chamber are evenly covered with frost, ice, or snow coat, it is most likely that the temperature sensor broke.

How do you fix it?  To eliminate the freezing of the freezer, you need to replace the temperature sensor.

Breakage.  Freon leakage. It’s the rarest case, but a refrigerant leak can really cause a snowball on the walls of the freezer. This happens only in the initial stages of the leak when the compressor loses its performance and operates without switching off, so it intents the ice. Later, when all the refrigerant has evaporated, both chambers will stop freezing and the ice will melt too.

Signs. The ice is mostly on the evaporator. The engine’s on all the time. The control panel may display error codes or the red light may flash.

How do you fix it? You need to repair or replace the evaporator and refill the Freon.

Ice formation in the freezer under the shelves is a natural physical process. But the ice is an insulator, it impairs the heat output. The more frost in the chamber, the longer the compressor cycle, the more energy is spent on freezing food.

Ice builds up on the freezer door

It happens that the alarm shows a problem with the freezer – the door is not closed tightly or the seal has broken off.  The ice is accelerating.  Now it is loose, like snow, wraps up the lids of the containers, settles down on the door.  The cold passes through such a fur coat with difficulty, the compressor works without stopping. 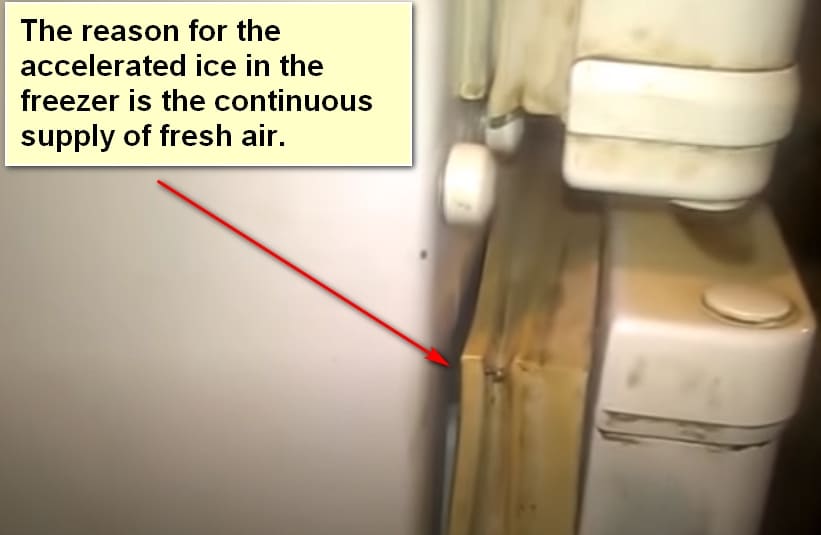 The reason for the accelerated ice in the freezer is the continuous supply of fresh air. The warm agent contains a lot of equilibrium moisture, and it precipitates on cold surfaces. But the frosty frost on the door widens the existing gap, increasing icing. A warm refrigerant circuit runs around the door aperture in the foam part. The ice melts flows under the bottom drawer, ice is formed at the bottom of the freezer.

If the freezer is electronically controlled, the regulator stops distributing the cold into the open circuit, and the thawing of food starts.

Ice builds up on the bottom of the freezer

Sometimes the food in the freezer is thawed due to lack or Undervoltage in the mains. If the fridge is turned on by itself after a standstill, the resulting puddle may go unnoticed and freeze, creating ice under the freezer.

In the maximum freezing mode when the door is opened, frost thaws and drips down and freezes down. It is necessary to keep the average temperature – less frost, less energy consumption. By following the manufacturer’s recommendations, it is possible to ensure that no ice accumulates at the bottom of the freezer.

Ice at the bottom of the No Frost freezer.

If the freezer uses a convection method to transfer cold from the evaporator to the food, there must be no frosting inside. The evaporator is located behind the panel in the cooling compartment and there is also a fan, defrosting TAN and a hole to remove condensation behind the circuit.

It happens that the hole gets clogged, the drainage hose freezes, adheres, and water accumulates in the evaporator chamber, freezes the boulder, seeps into the working chamber, forming ice in the freezer chamber. Soon No Frost will be out of work because of the accumulated ice and the frozen fan. Sometimes the droplets from behind the panel roll up for a long time, and the freezer will place blocks of ice right in the trays.

If the panels are cold, No Frost will put a thin layer of ice on the walls of the freezer.  Gradually, it melts, drips off onto the tray. What if there’s ice in the drawer? Turn off the freezer or compressor, defrost the system, and look for a malfunction.

Refrigerator trips issues due to GFCI